TL;DR: CTF-like box with a bit of code review for initial access (PHP) and EoP (python).

At the bottom of the page there is an About button: 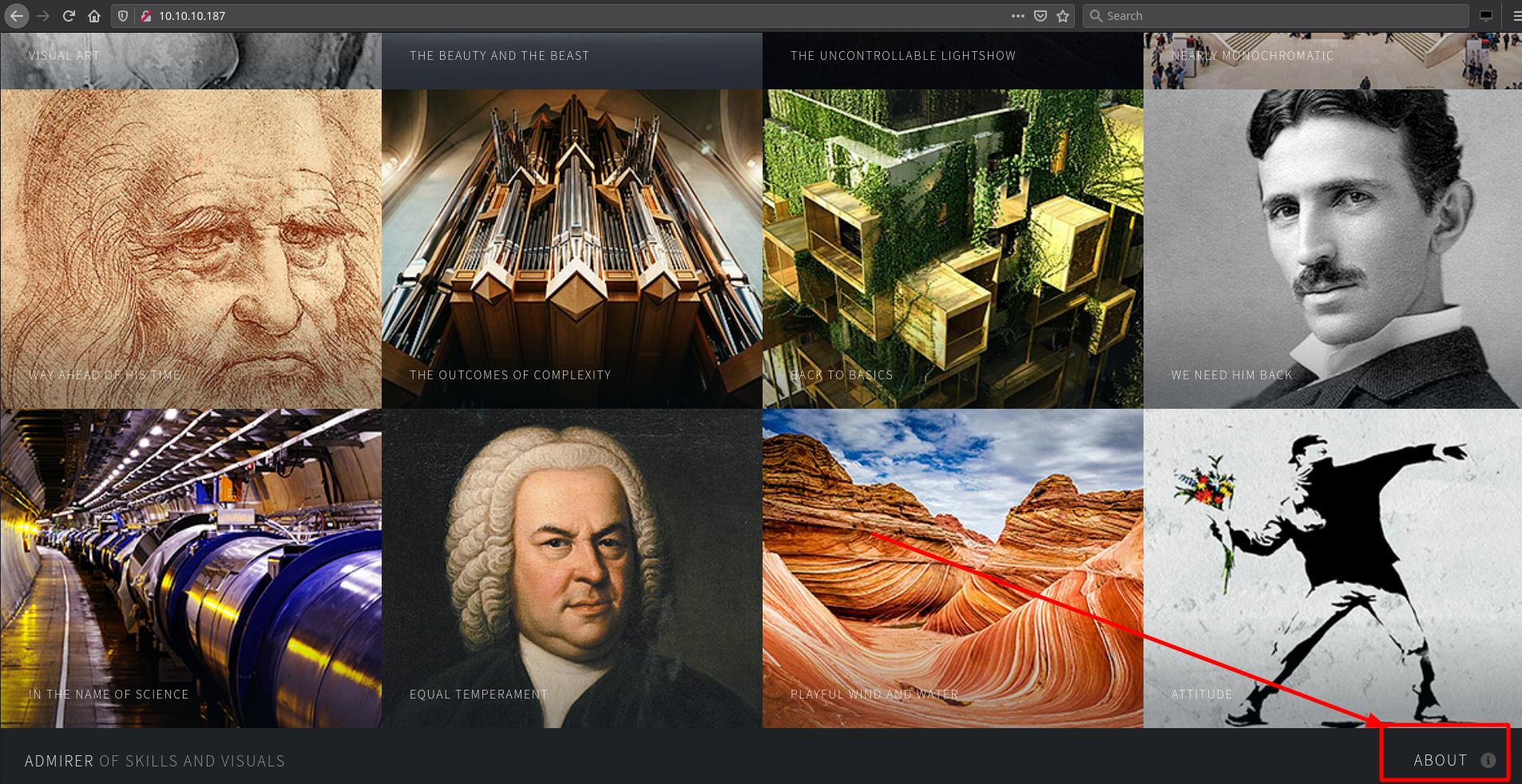 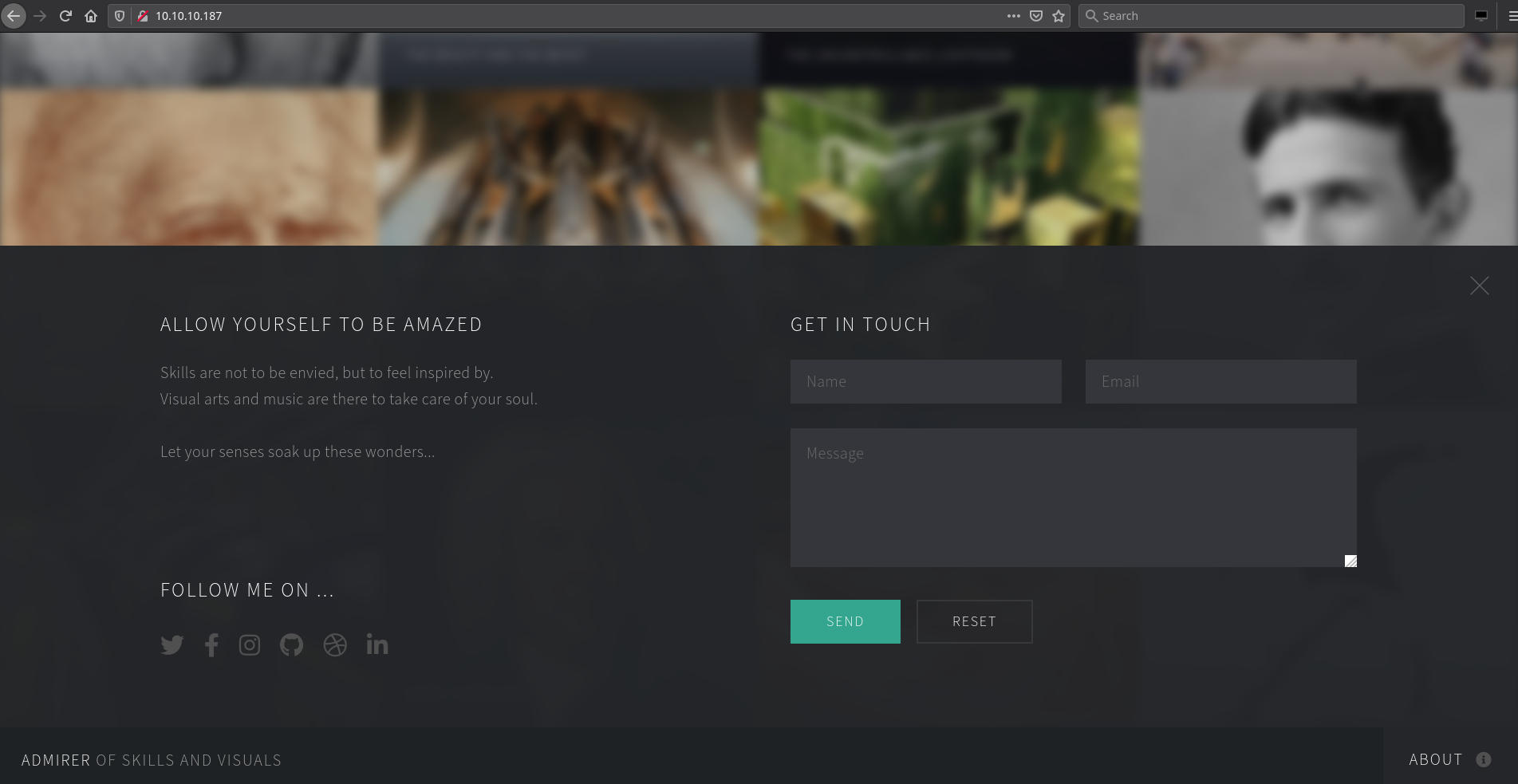 On HTML source we can see a comment associated to the form.

It seems it was the first rabbit hole.

Let's try to find some web pages with ffuf:

There is a robots.txt:

As the FTP port is open we can try to access it with the credentials.

It's also possible to use the CLI:

dump.sql contains the table of images displayed on the home page, nothing interesting except the db name admirerdb and knowing it's served on localhost.

There is a w4ld0s_s3cr3t_d1r fodler which is the same as admin-dir and contains the same files except that there is one entry more in credentials.txt.

We can now read the PHP part of index.php:

That gives us the MariaDB credentials.

But what will interest us more is what's inside utility-scripts (accessible publicly).

And that's the vulnerable code without the comments and HTML:

The task number is directly passed into a shell_exec() without any security so we would have been able to do a system command injection if task was not compared to a whitelist of allowed task number. It's a loose comparison so there is maybe a way to bypass it.

In the end admin_tasks.php seems to be a rabbit hole.

Now there is a step requiring guessing. In db_admin.php there is a comment:

An alternative to db_admin.php is Adminer (formerly phpMinAdmin) that is similar to phpMyAdmin. Also Adminer is the name of the box... 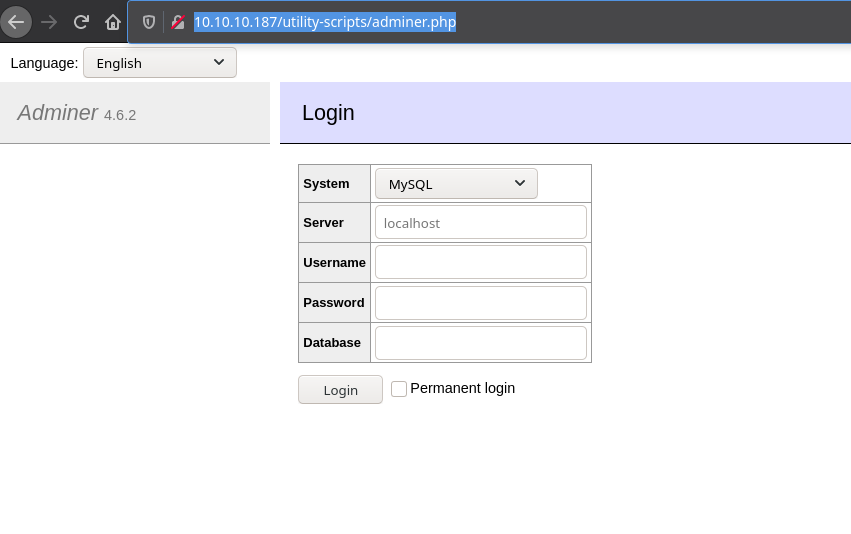 But we can't login with both set of credentials we found earlier.

Adminer versions up to (and including) 4.6.2 supported the use of the SQL statement LOAD DATA INFILE. It was possible to use this SQL statement to read arbitrary local files because of a protocol flaw in MySQL.

So let's read the associated references:

So we need to host a database and access it remotely from Adminer.

By searching around, I found this msf issue: [Suggestion] Add rogue MySQL server for file theft. bcoles asked msf team to create of rogue server module for this kind of exploit. There is still nothing in msf but the author gave an example with this python script: https://github.com/Gifts/Rogue-MySql-Server

Let's run it so start the fake database as a daemon:

In rogue_mysql_server.py I changed the filelist to read /etc/passwd instead of c:\windows\win.ini.

We can login by setting our IP address and put whatever credentials.

Yet we can't read /etc/passwd because of open_basedir value. 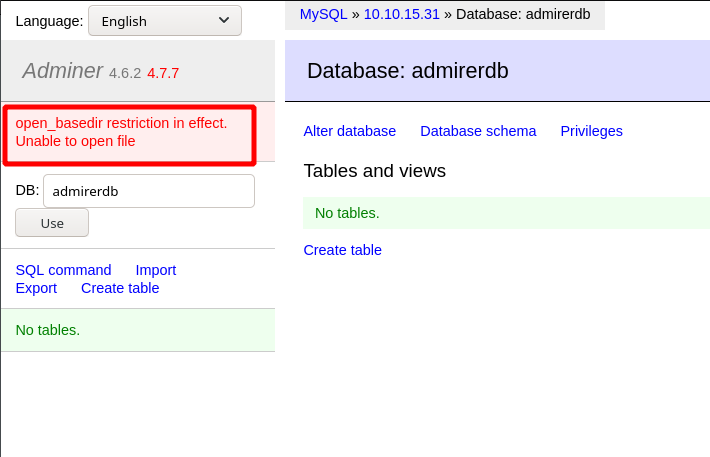 The file we need to read is index.php with the up-to-date credentials.

We can change filelist (add '/var/www/html/index.php') again and restart the rogue server.

Then if we read the rogue server's logs:

The we can re-use those credentials over SSH:

So let's read the script /opt/scripts/admin_tasks.sh:

It looks like we'll have to mess with the python import system.

I won't explain to much here, if you want to understand the attack please read SIGSEGv1 Quals 2018 - Write-ups - 100 - Fun avec python - App-Script.

shutil.py (a reverse-shell because spawning a PTY is useless as the python script is sent to background)

Then let's call the script: