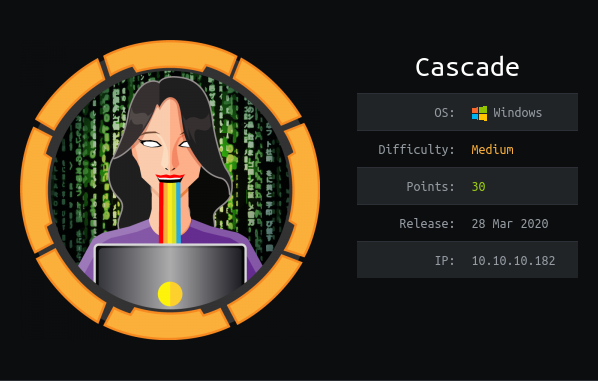 As usual that nmap scan to known where to start:

The Windows machine is using SMBv2 so a lot of tools working with SMBv1 only will be ineffective.

For example enum4linux will be able to find info about users but will fail for anything else.

arksvc is in a weird group AD Recycle Bin, that may be useful later arksvc and s.smith are in Remote Management Users so they will be able to connect over RDP. Then we have organization logic information:

Anyway enum4linux is just a poorly written wrapper around various more specific tools such as rpcclient. So we can directly use rpcclient.

I quickly try auth bruteforce over SMB (with CrackMapExec) with login=password but it was ineffective.

Enough with SMB, let's try to explore LDAP now that we have valid account names.

Let's see what we can dump anonymously with ldapsearch (a binary of openldap).

The output is 6k lines long so it will be easier to store it in a file and search for some specific keywords.

I already knew form enum4linux that s.smith is in Audit Share group but now we know he can execute scriptPath: MapAuditDrive.vbs.

User r.thompson has a weird custom property cascadeLegacyPwd: clk0bjVldmE= that looks like a password encoded in base64:

There is also another attributes msDS-SupportedEncryptionTypes: 0.

By default this machine use msDS-SupportedEncryptionTypes: 31 so the accounts will use one of those algorithm: "DES_CRC","DES_MD5","RC4","AES128","AES256".

But type 0 doesn't exist so it's maybe an hint to say no encryption is used.

So let's find if another account has msDS-SupportedEncryptionTypes: 0: the a.turnbull is but there is no cascadeLegacyPwd property for him.

By the way there is no other object using cascadeLegacyPwd.

We can quickly check is the password it valid with crackmapexec:

Credentials are valid so we will be able to enumerate the shares with [smbclient][smbclient]:

Let's try to see what is located in non-default shares:

This group gives you permission to read deleted AD object. Something juicy information can be found in there:

So TempAdmin and ArkSvc will definitly be helpful for the EoP.

In a registry script we can find a VNC password probably for s.smith user.

Let's see if we can decode the hexadecimal with ctf-party:

But decoding the hexadecimal (eitheir with high nibble first or low nibble first) doesn't give a readable value.

This is because VNC stores passwords encrypted with DES. Hopefully for us VNC uses a hardcoded DES key to store credentials.

To have metasploit loaded in a irb session, the easier is to launch msfconsole and use the msf internal irb command.

However for ArchLinux users, there was currently a bug (FS#66480) preventing from being able to laod irb from msfconsole but I fixed it upstream. For those still experiencing this bug in some distro, a workaround is

In both cases we can launch the Rex module and decrypt the password:

PS: Audit$ is not readable by r.thompson.

SYSVOL is often a great place to find password of service accounts used in install scripts:

I didn't find anything useful in it.

We can't connect with r.thompson as it's only in IT group. See with evil-winrm:

But we can use s.smith account to connect via WinRM as it is in Remote Management Users group.

Now we have a shell we can start by grabing the user flag:

This user will probably will be useless, a good guess is finding information about ArkSvc as we saw earlier.

Network enumeration to Elevation of Privilege#

Also now we get acess to s.smith we should be able to see shares that were protected earlier like Audit$.

RunAudit.bat (see below) gives the idea to check the DB is we miss it.

Let's open it with Dbeaver.

There is a DeletedUserAudit table containing the name of removed users we saw earlier in \\CASC-DC1\\Data\IT\Logs\Ark AD Recycle Bin\ArkAdRecycleBin.log.

But more interesting there is a Ldap table with only one entry.

So we got the password of ArkSvc but it's not direct base64 nor SSHA or MD5 LDAP format. I just pasted BQO5l5Kj9MdErXx6Q6AGOw== on a search engine and found a C# script decrypting the AES encrypted value.

Note: it's also possible to reverse engineer the binary to tell that.

So ArkSvc password is w3lc0meFr31nd. As the password was encrypted with the key c4scadek3y654321 it must be from the author for the Cascade box.

Elevation of privilege: ArkSvc to Administrator#

When writing the name of the software on a search engine you immediatly find this article: Active Directory Object Recovery (Recycle Bin).

Nice it seems it's a domain wide recycle bin:

And we are exactly running Windows Server 2008 R2 so that perfectly matches.

On to the AD Recycle Bin object recovery process. While providing considerably more value, the AD Recycle Bin was initially hampered by the fact that it was relatively difficult to use. Prior to Windows Server 2012, viewing the contents of the Recycle Bin required the use of an LDAP tool or PowerShell. For example, this PowerShell query will return all of the deleted objects within a domain:

Let's try this out:

With a command given in the article I tried to restore the TempAdmin account:

But it seems we are denied even if ArkSvc is in the right group.

Note: You can get the distinguished names of deleted objects by using the Get-ADObject cmdlet with the -IncludedeDeletedObjects parameter specified.

So we can use this request to list all properties of the deleted object:

Remember, Meeting_Notes_June_2018.html said TempAdmin and administrator have the same password.