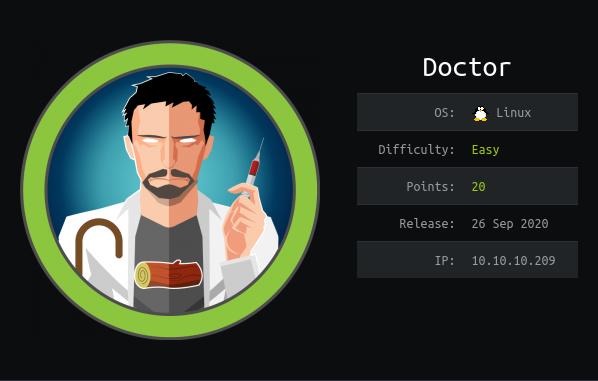 Browsing with the IP address we have nothing fancy but we can find a reference to doctors.htb.

So lets' add it to /etc/hosts.

At http://doctors.htb/post/new there is a feature where we can post a message.

The source code of http://doctors.htb/archive is displaying the following XML content:

It looks like a RSS feed. If I create a post, an entry appears under the RSS feed:

We can try to inject a SSTI payload to see if it is executed and reflected.

As the box is not realistic and most challenge "developers" only know python and never try another language so it's almost safe to assume the web app is coded in python and the template engine will be Jinja2.

Let's directly try a simple RCE to get a reverse shell:

After triggering the RSS feed I received the connection on my listener:

Elevation of Privilege (EoP): from web to shaun#

Interestingly the user we have is in the adm group, this means it can read /var/log/.

Let's check users with a shell to know which user target next:

As we are in adm group I directly targeted /var/log/:

Elevation of Privilege (EoP): from shaun to root#

We have not used Splunk yet, it must be involved in next step.