TL;DR: We have to find some hints in a FTP, finds creds through a Path Traversal in NVMS-1000 and gain a low privilege shell, then we EoP via NSClient++ to get admin RCE.

Let's start with a nmap scan to find open ports and identify services:

Nmap told us it was possible to connect to FTP anonymously but found nothing to list so let's try ourselves:

But there is nothing (or I thought so).

Both services are asking for credentials but we have none yet. Let's see if they are vulnerable in a first place.

Let's look for a NSClient++ exploit:

Once we have a low privileged shell it will be possible to run a command (nscp web -- password --display) or read the config of NSClient++ to retrieve a user password. Usually NSClient++ run as privileged user so with an app user we could create some tasks that will be run by the app daemon and gain more privileges.

So let's see if the directory traversal works, I have to use dos2unix to convert CRLF to LF (Windows to Linux).

It failed but maybe because C:\windows\win.ini doesn't exist. Let's try with something more reliable like the host file.

It's a false positive occurring when there isn't an file extension. (At first glance it's seems the exploit is not working or the server is not vulnerable).

From Nmap script it's it is SMBv2 but we can't list any shares:

As I said in Nest - Write-up - HackTheBox,

CrackMapExec, smb-enum-shares.nse and enum4linux don't find any shares because they support only SMB v1 that is disabled.

As we saw earlier with ftp CLI we didn't see anything. But I tried again with FileZilla and saw two folders this time, with a file in each:

Let's use NVMS-1000 path traversal again but this time with: Users/Nathan/Desktop/Passwords.txt thanks to the information we got on the FTP.

No file but we are sure it's here. This exploit looks bad so it may be broken.

With curl no result either:

But with metasploit we get the file (WTF):

With the looted passwords let's bruteforce SSH for the users nadine and nathan by using a metasploit module.

So a valid set of credentials was nadine:L1k3B1gBut7s@W0rk.

metasploit automatically opened us a session but with cmd.exe. But I prefer to have a powershell shell.

Let's get our user flag:

Elevation of privilege through NSClient++: Nadine to NT Authority\SYSTEM#

Remember of the hypothesis I made about NSClient++. Let's read EDB-ID 46802 again.

We can use the CLI tool to display the password: 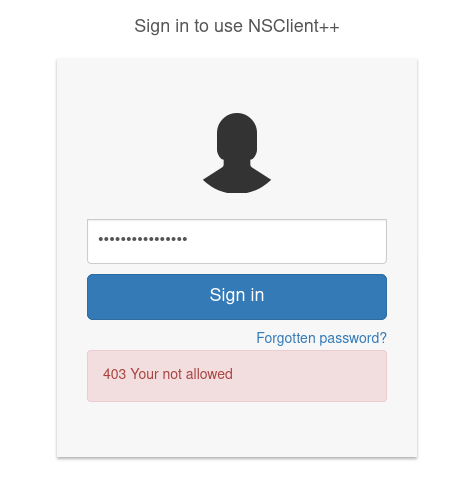 But if we read the config file gc "c:\program files\nsclient++\nsclient.ini" we can see something.

allowed hosts = 127.0.0.1 tells us we can authenticate only from localhost.

But as we have an SSH access we can do some local port forwarding (you can read about this technique on my article about pivoting).

We map the local port 8443 on ServMon machine to local port 9999 on our machine.

Now the exploit tell us to enable some modules:

We can try to download the bat script with Certutil and a local HTTP server.

But that's a failure:

We can't download our script because it's blocked by an AV. So let's create is on the server directly.

I tried to download nc.exe with certutils but it was blocked by the AV too.

So I downloaded it via scp:

I tried to create the RCE via the webUI as in the exploit but wasn't successful.

So instead I created the task via the API:

And finally got a privileged shell: