Joey gave me this screenshot to prove he got into The Gibson. Can you help us hack The Gibson too?

We have a PNG image.

We can use pngsplit to split the png into chunk:

Comments are in iTXt chunks (there are 47).

Obviously we can see that all iTXt comments contains 1337 and C0|V||V|3|\|7 meaning comment so we are on the good way looking at PNG chunk iTXt Comment.

Now let's extract the part that change between chunks:

I used png-itxt to read them instead of parsing them myself with a script because:

Compressing and decompressing of data, where appropriate, is handled transparently to the user so you only ever see the uncompressed values.

Some regular expression to filter:

That means nothing and doesn't looks like 1337, base64 or hex. Let's get the value chunk by chunk.

Horizontally we can't see anything but vertically...

Now let's fire ruby in order to sort them! order.rb:

Damn new york... some chick tricked you into standing in the rain on the very first day... it's payback time!

Well we have a CGI:

So we can see there is another script in the CGI directory.

Now we have just to request http://sprinklers.alieni.se/cgi-bin/enable_sprinkler_system and get the flag SECT{-p00l_On_t3h_r00f_must_h@v3_A_l3ak!-}.

/admin is protected with basic auth and ?id= seems SQLi vulnerable but protected by a WAF (Attack detected!!!).

I forgot to check robotos.txt:

Now we know the WAF is not one but a regex.

I read on a forum that data are proccessed in this order GET, POST, COOKIE by default (configurable in php.ini).

So the idea is to send a legitimate or a harmless payload in POST like id=vuln and our SQL injection in GET. The server will apply the regex on $_REQUEST['id'] that will be $_POST['id'] (I understand that's because this is the last one to be processed), the server will see nothing dangerous and $ad = get_ad($_GET['id']); will be executed.

the first one is ads

and the second one is login. Now we are looking for columns:

So columns are id, name and password. Now we can display users:

They must be using md5. Is used hashkiller.co.uk that told me the password is secret.

Now we have access to the admin area http://naughtyads.alieni.se/admin/

For those who don't know what to do with the form check the comment that tell us to check the description but personally I remembered to put Gill number into ads section. 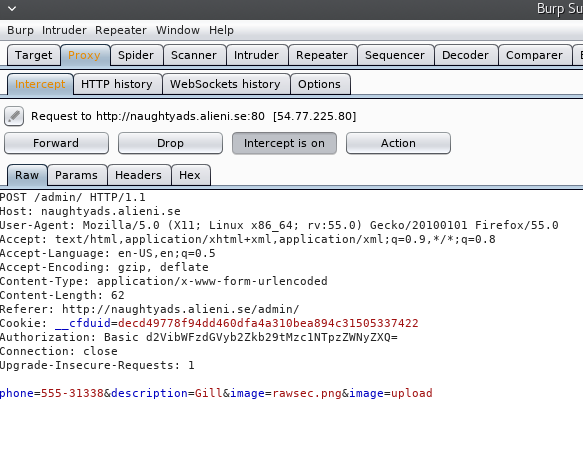 Bonus: why -- - is need in MySQL where -- seems enought: MySQL Injection: Comments On Comments